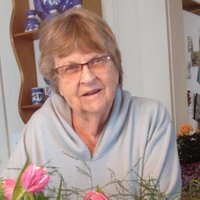 Our Heart to Her Heart Jean Bryant Schissel, a resident of West Okoboji, Iowa passed quietly on April 5, 2020 of old age. She was born on January 14, 1921, in Cherokee, Iowa to her father William Wesley and mother Ocie Cole Bryant. She was raised with her older sister Marjorie on their large cattle feeding farm in northwest Iowa. Her father was also an auctioneer in Sioux City, Iowa and bred horses for the races at Aks-Ar-Ben in Omaha, Nebraska. Throughout her life Jean followed the Triple Crown races. Her mother was a school teacher and managed the day-to-day running of the farm. Jean attended grade school in Cleghorn, Iowa and later graduated from Cherokee High School. She attended Stephens College in Columbia, Missouri for two years and then matriculated to the University of Iowa studying humanities. She was a passionate Delta Gamma Sorority sister and she kept in touch with sisters throughout her life. At college she met and fell in love with Donald J. Schissel, a medical student. They married on February 23, 1943 in the Immaculate Conception Rectory in Cherokee. Their honeymoon was spent at WW II Army Medical training camps before Don’s Corp was shipped to Europe. After the war, they settled in Des Moines, Iowa and raised five “lively but never destructive” children. Jean was active in the Des Moines Junior League, Great Books, Questers Antiques where she frequently featured her Blue Willow China and a member of the Board of Directors of the Terrace Hill Society. Jean also managed her Cherokee farm after her mother, Ocie, passed. Jean Schissel is survived by her children, John B, (Nicky) Schissel of Des Moines, Iowa, Kathleen A. Schissel of Minneapolis, Minnesota, Linda L. Schissel of Minneapolis, Minnesota and Donald J. (Rosemary Lane) Schissel Jr. of El Cerrito, California; two granddaughters, Mindy (Brian) Jones of Middleton, Wisconsin and and Carey (Dean) Farley of Chicago, Illinois; and five great-grandchildren. She was preceded in death by her husband, Dr. Donald J. Schissel; her youngest child, Frederick “Fritz” T. Schissel and her daughter-in-law, Lynnette Curtis Schissel. Jean was never happier than when she was at her summer “cottage” at Lake Okoboji watching her children, grandchildren and great-grandchildren swimming, sailing, bicycling and kayaking. In 2000, she moved permanently to her lake home after the death of her husband. Her neighbors in the fall were the geese, coots and bald eagles on the bay; in the winter, the ice fishing huts and snowmobilers; and in the spring, baby wood ducks and mallards. Her family thanks all of the Iowa Great Lake angels and helpers through these years and is planning a celebration of her life in the summer. Memorials in Jean’s honor can be made to the Okoboji Foundation, Lakeside Lab or a charity of your choice.