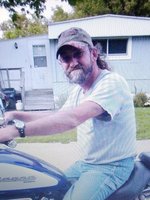 Kelly Joel Meyer, the son of Richard and Aletha (Krahling) Meyer, was born August 1, 1961 in Sibley, Iowa. He graduated from high school and bought his first car at age 16 with money earned from his lawn mowing business.

Kelly was married to Norma La Duke and the couple had two children, Joshua and Ashley. The family lived in Arizona until their divorce when Kelly and Ashley returned to Iowa. Kelly worked robotics at Polaris, in the parts department at Lakes Motors and as a fork lift driver and machine operator at Pure Fishing. When Kelly was younger, he loved working on cars with his dad which gave him the passion for cars and motorcycles. He was so proud of following in his dad’s footsteps as a machinist. Kelly also worked at Tail-n-Ale, Gingham Inn, and worked part time welding at Kuhlman Welding and construction with Greg Feldhacker. Kelly’s last position was a machinist at Ferguson Manufacturing.

While Kelly was working the weekend shift at Pure Fishing, he met Dee. They were married on June 10, 2006 at Eleanor Bedell State Park. They honeymooned at one of Kelly’s favorite place, the Black Hills. They made many return trips enjoying hiking, collecting souvenirs, panning for gold, exploring ghost towns and simply taking in the beauty of the area. They spent a lot of time driving around their favorite scenic drives on the bike or in one of his other loves, his cars.

He enjoyed fishing, camping, gardening, target shooting and even taught Hope how to shoot. He had a passion for pets including Molly, Jethro and the turtles.

Kelly did everything with a passion, whether it was work, his cars, pets or his family and friends. Kelly was a private person but if you were lucky enough to be his friend, he would go to any length for you, battle to the end for you or give up his life for you.

Kelly told Dee every day that he loved her and that he was lucky to have met her but Dee felt like she was the lucky one. Kelly was a man of strength, true character, trustworthy and had a gentle compassionate soul. He loved Dee unconditionally and was devoted to make her happy. He accepted Dee’s granddaughter as his own and they raised her as their daughter.

Kelly passed away October 24, 2020 at his home in Spirit Lake at fifty-nine years of age.

Kelly was preceded in death by his parents, Dick and Aletha Meyer; son, Joshua; grandson, Aaron.