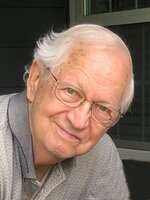 A funeral service for Ronald Kindwall will be held Monday, December 20, 2021 at 11:00am at the First Presbyterian Church in Spirit Lake. Burial will be at Lakeview Gardens Cemetery. Visitation will begin at 10:00am on Monday at the church.

To view a livestream of the service, please click on the following link; Ronald Kindwall - Service of Remembrance - YouTube.

In lieu of flowers, a memorial fund has been established to benefit Ron's favorite charities.

Ronald Dean Kindwall, 86, of Spirit Lake, Iowa went to be with his Heavenly Father on December 15, 2021. He passed away at home, surrounded by his loving family, from complication of acute myeloid leukemia.

Ron was born October 24, 1935, at the farm home of Wesley & Annie Myra Kindwall north of Alta, Iowa. Following graduation from Alta High in 1953, he attended Iowa State University and then graduated from Morningside College in 1958.

While attending Morningside, Ron met Janet Cook on a blind date and Ron always joked that she was “blind ever since”. She quickly became the love of his life and they were married on September 6, 1959 at Excelsior Methodist Church, rural Milford, Iowa.  After Officer School in Rhode Island, Ron was assigned to serve as a Navy Supply Corp Officer on the USS Lewis in Guam. After about 4 months the ship was decommissioned, and he continued his service at Navy Audit Chicago until 1962. Ron was then employed as a CPA with Arthur Andersen & Co. and Woodhead Industries in the Chicago area. In 1978 Ron and Janet moved back to Iowa with their five children in tow.

In Iowa, they lived in Spencer, Estherville, Oskaloosa, Garner and most recently, Spirit Lake. Ron was a hard worker and devoted himself to making sure the job was done right at Van Ladder/Kindwall Corp. in Spencer, Glasstite north of Estherville, William Penn College in Oskaloosa and Stellar Industries in Garner. Finally, for more than 26 years, Ron worked hand-in-hand with his wife as Imprinted Promotion Specialists. Ron’s dedication and love of his work and clients showed in the fact that he continued processing orders through October of this year.

As well as having a strong work ethic, Ron highly valued his family. His children remember his years as a 4-H leader, Sunday school teacher, and water ski and driving instructor. He was a loving father and grandfather and supported his children and grandchildren in all they did.

Ron was a man with a big heart and a desire to serve others. He was a Rotarian for 40 years and served on many boards and committees in the communities where they lived. For 14 years, he generously volunteered, with the Senior Health Insurance Information Program (SHIP) helping people with Medicare and related insurance. Ron was also dedicated to his church and was a man of strong faith. He had a personal relationship with Christ, his Savior and passed his faith on to his children and grandchildren as he set an example of humble love and service to others.