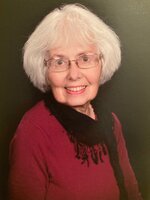 A Memorial Serivce for Donna Tritle, of Spirit Lake, will be held at 1:30 pm, Saturday, April 30, 2022, at the United Methodist Church in Spirit Lake.  Interment will be at Lakeview Cemetery in Spirit Lake.  Memorials can be sent for Donna in care of Elwin Tritle to: Turner Jenness Funeral Home, 1302 Hill Ave. Spirit Lake, Iowa 51360.

Donna Tritle, daughter of Cecil and Ruby (Bass) Rooks, was born April 27, 1938, in Marshalltown, Iowa. On June 6, 1959, she married Elwin Tritle of Spirit Lake. Together they raised five children and also a niece. Donna was proud of all her children and never missed one of their activities.

Donna’s mother was a homemaker, bookkeeper for the family businesses and a creative visual artist; her father was nationally recognized as a horse judge, and was also a farmer and entrepreneur. It was in this environment that her love of music, and particularly for the piano, was fostered. Donna graduated from Eldora High School and attended Iowa State College (now Iowa State University). She met her future husband, Elwin, at the Wesley Foundation in Ames, Iowa during that time.  She became a longtime member of the Spirit Lake United Methodist Church, and at various times served as church secretary, financial secretary, in United Methodist Women and Circle, sang in the church choir, accompanied the choir until recent years, and together with Elwin co-chaired the Missions Committee and taught Sunday school. For many years, she had her own store on Hill Avenue, The Hope Chest, and did bookkeeping for various entities including the family farm.

Donna was active with her husband Elwin in the Dickinson County Farm Bureau, where she once served as Women’s Chairman and invented the idea of Christmas beef gift certificates, which became a statewide and then a multi-state promotion. She also served in PEO, as a member of the Northwest Iowa Mental Health Board, and she attended countless Spirit Lake Community School, 4-H, and Girl Scouts activities (where she was troop leader).  Donna and Elwin were also active together in the Neighborhood Club.  She was even recognized as Homemaker of the Year for Dickinson County. Many Spirit Lake music students will also remember her generously accompanying them for music contests in junior and senior high school. She was passionate about seeing her children and grandchildren, whether in Spirit Lake, New York, Arizona, Colorado, or California.

Donna passed away on Wednesday, January 12, 2022, with her husband and children by her side. She was preceded in death by her parents Cecil and Ruby Rooks, and her brother, John Rooks.  Left to cherish Donna’s memory are her husband of 62 years, Elwin, and their five children and their spouses, Kent Tritle and Arthur Fiacco of New York City, Greg and Sheila Tritle of Spirit Lake, Dan Tritle and Karla Oleson-Tritle of Spirit Lake, Brad and Ayako Tritle of South Orange, New Jersey, Jennifer Tritle-Oitzman and Cory Oitzman of Spirit Lake; their grandchildren, Kaylee Tritle of West Des Moines, Aisha Tritle of Glasgow, Scotland, Emily Spangler of Spirit Lake, and Bridget Tritle of Spirit Lake. Niece Diane (Jess) Dreadfulwater has been a member of the immediate family since 1964. Donna is also survived by her siblings Ike (Peg) Rooks of Eldora, Robin (Marc) Hyland of Grimes, Robert (Marlana) Rooks of Gabriola Island, British Columbia; and many nieces, nephews, cousins and friends. She is beloved for her warm smile, generous heart and positive spirit and will be missed by many.