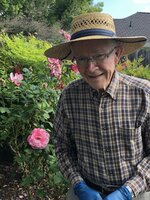 A memorial service for Merrill Wunder, 85, of Roseville, California and formerly of Lake Park, will be held Monday, May 9, 2022 at 2:00 PM at First Presbyterian Church in Lake Park. Visitation will begin one hour prior to the service at the church. Burial will be at Silver Lake Cemetery in Lake Park.

Merrill Lee Wunder, son of Herman and Elizabeth (Sell) Wunder and the youngest of 5 children, was born October 16, 1936, on the family farm in Lake Park, Iowa. After graduation from in 1954, Merrill attended the .  In addition to successfully completing the Air Force Reserve Officers Training Corps (ROTC) program, Merrill graduated with a Bachelor of Science degree in Business Administration in February 1959.  He was commissioned 2nd Lieutenant in the Air Force and reported for duty that April. He was stationed in Lackland AFB in , Ramey AFB in Puerto Rico, and Charleston AFB in . After completing his commission, he worked for Del Monte Foods in Rochelle IL before rejoining the Air Force.  He last served at Malmstrom AFB in .

While stationed in , Merrill met his future bride, Joann Sellers Marschitz. They were married July 6, 1968, in Columbia, SC.  After an honorable discharge, Merrill and Joann moved to , where he earned an Accounting Master’s degree from . They later moved to the area where Merrill worked as a civilian accountant at McClellan AFB until his retirement.

His membership at Fair Oaks Presbyterian Church in was an important part of Merrill’s life. Involvements included the Mariners Fellowship Group, a Men’s Bible Study group, teaching English as a Second Language classes, and traveling to twice on short-term mission teams. He also enjoyed his rose and vegetable gardens.  As a way of helping with his arthritis, he exercised almost daily through swimming and using weight machines. Merrill always enjoyed trips back to to visit family and friends.

In lieu of flowers, memorials can be directed to JJJ Scholarship Fund at at Okoboji or First Presbyterian Church of Lake Park, Iowa.