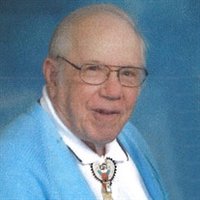 Memorial services for Wesley Lynn, 85, of Lake Park, Iowa will be held Monday, June 17, 2019 at 10:30AM at United Methodist Church in Lake Park. Visitation will begin one hour prior to the service at the church. Burial will be at Lakeview Cemetery in Spirit Lake. Wesley passed away Wednesday, May 15, 2019 in Glendale, Arizona. Wesley S. Lynn was born on October 31, 1933 to Ray A. Lynn and Carrie Neva Lewison, in Forest City, IA. As a child, they lived in Sherborn, and Madelia, MN and McCook Lake, SD. When his father died in 1947, they moved to Lake Park, IA. Wesley graduated from Lake Park High School in 1951, and attended Commercial Extension School of Commerce in Omaha, NE where he learned the art of being a Railroad telegrapher and depot agent. He started work with the Rock Island Lines in White, SD on May 1, 1952 and worked in various extra board assignments. His first permanent position was in Iowa Falls, IA followed by Joliet, IL and Estherville, IA in 1954. He met his future wife Vivian and they were married on March 17, 1956. He was inducted into the army on May 7, 1956 and after basic training in California was assigned as a radio teletype operator in Germany, where he served 20 months, returning May 7, 1958 and honorably discharged in May 1962. His railroad assignment was in Owatonna, MN. Vivian graduated with her BSN degree in nursing at the University of Minnesota in August 1958 and worked at Owatonna City Hospital until their first child, Ray Charles, was born there in 1961. That fall Wesley became agent at Livermore, IA. Their second child, Kurt David, was born at Britt, IA, in 1963. In 1964 Wesley became agent at Lake Park, IA, where he continued until he retired. In 1969 Wesley passed his amateur radio exam and became a "Ham". He put together a kit radio and got on the air for the first time in July. He especially enjoyed a group of hams who call themselves "county hunters" who make radio contact with someone in every county in the USA. In 1982 he was recognized as the 363rd person in the world to work all counties. He continued to enjoy this and to try to transmit from all of the counties. At the time of his death he had been to and given out radio contact from 1620 counties in 48 US states and from all of the Canadian provinces except Nunavut. He was a member of the Lake Park United Methodist Church and a 60+ year member of the Masonic Lodge, holding all offices in the fraternity. He was a 50+ year member of the Order of Eastern Star and a Past Patron. A 35 year member of Lions Club when the local club discontinued, and an Abu Bekr Shriner who enjoyed parades all over the area to raise funds for the crippled children's hospital, first on PUCH motorbikes, and later in the Mini Indy cars. In 1988 they purchased a second home in Phoenix AZ and after retirement they became Snowbirds, living, 6 months each in Phoenix, and Lake Park. He volunteered at the Deer Valley Petroglyph Preserve in AZ and on the SALT trail patrol for the Dickinson County Sheriff in IA. Wesley is survived by his wife Vivian, sons Ray (Debra) of Nebraska City, NE and Kurt (Ann) of Lake St. Louis, MO and grandchildren, Stephen (Allison) Lynn, Rachel (Matthew) Honken, Jason (Jennifer) Lynn, Kristie Lynn, DVM(Richard Mayfield), Sheila Lynn, Aaron Lynn, Samantha Lynn, and great grandchildren Lucy Lynn and Iris Honken. Wesley was preceded in death by his parents and brother Harvey. His ashes will be buried in the family plot in Spirit Lake, IA.