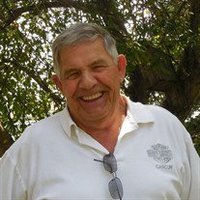 A funeral service for Harlan Schumacher, age 77, of Milford, will be held Thursday, July 25, 2019 at 10:30 AM at St. Joseph Catholic Church in Milford. Visitation will be one hour prior to service time at the church. Harlan Joseph Schumacher was born on September 21st, 1941 to LaRue and Albert Henry in Woodbine, Iowa. He had one older sister, Janet, a younger brother, Duane, and three younger sisters, Deanna, Darlene, and April. Harlan married the love of his life, Kay Scott, on December 28th, 1961 in Spirit Lake, Iowa after serving in the Marines Corps. They raised their children, Christine, Ted, and Tom, west of Milford on Harlan's childhood home where he farmed for most of his life. He loved all living things, particularly his chihuahuas, Gracie and Happy. He was happiest when he was in nature, including fishing, hunting, metal detecting, collecting rocks, and trapping turtles. He took great pride in maintaining his property and garden. He loved sitting at his kitchen table having coffee and watching the birds out his window. He was also a life-long reader and enjoyed writing. Harlan and Kay loved traveling with their family. Fishing trips to Alaska were particularly cherished. Harlan passed away on July 20th, 2019 just the way he wanted it, peacefully at the farm he loved. Family was the most important thing to Harlan. Left to hold dear his memory are his wife of 58 years, Kay Schumacher, his three children, Christine (Lee) Adams, Ted Schumacher, and Tom Schumacher, his three sisters Janet Baschke, Darlene (Ray) Gustafson, and April (Kirk) Kinkade. He also has seven lovely granddaughters Sundae (Mike) Long, Tiffany (Gene) Mercer, Maddie (Jerry) Kampf, Teddi (Brian) Schumacher, Toni (Matt) Huckeba, Tori Schumacher, and Teneil Schumacher; honorary grandsons, Som (Jalene) Keokhamthong and Seemorn (Nichole) Keokhamthong; honorary family members, Khouanh Keokhamthong and Noy Currie. He doted on his six great-grandchildren, Kaden, Mia, Kennedy, Jasper, Owen, and Nora. He is preceded in death by his parents, sister, Deanna, and brother, Duane.