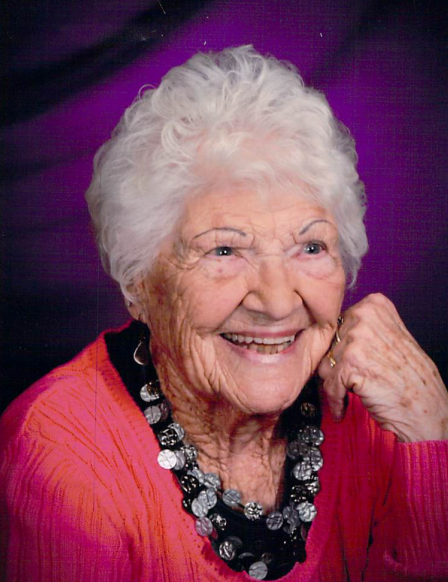 The family requests memorials be given to the Iowa Department for the Blind at 524 Fourth Street Des Moines, Iowa 50309.

Bobbie (Roberta) Reinholz Davis was born on November 28, 1923, in a hospital in Marshalltown, IA to Otto and Nellie Meeker Reinholz. She grew up and lived in Ames, IA for eight years, then moved to a farm west of Ames. Bobbie had one younger sister, Dora Reinholz Steiner. She attended Jordan Consolidated School K-12 and graduated in 1941.

Bobbie attended Iowa State for 2 ½ years to study Home Economics. She moved to Harris, IA to teach Math and Home Economics. There was a shortage of teachers and Bobbie was issued this special teaching certificate.

It was in Harris, she met her husband to be, Bill Davis. He was a farmer and a school bus driver. It was love at first sight, so six months later they were married on March 3, 1945, at a parsonage in Ocheyedan, IA. Bobbie taught another year, then she and Bill moved to Ames where they farmed for 12 years. Bobbie was very active in the Farm Bureau, where she served as Boone County Chairman. She attended convention representing Boone County in New York City in 1956. She won $100 on the “Break the Bank” TV show and with joy purchased clothing for her children from a New York Department Store.

In 1959, Bill and Bobbie moved back to Harris to farm on the Davis family homestead. They also started the largest laying flock of chickens in the area which was upwards of 25,000. They did business with Hy Line Hatchery in Spencer and Land O Lakes.

Bobbie was very active in the community with substitute teaching, the bowling league, card club, and played the church organ for worship services, weddings, and funerals at the Methodist Church.

When they retired, Bill renewed his passion for scenery and landscape photography, they traveled the country on photo shoots. Bobbie found golf courses at each stop and golfed while Bill was out shooting his photos. They traveled to McAllen, TX every winter for 25 years. In the mobile home park where they stayed in Texas, Bobbie put on a Fashion Show every year for 12 years. It was a very big deal and all her friends modeled in the show. Bobbie played the organ in Texas, it was a very important activity for her, and she was always available for non-denominational church services there.

Bobbie remembers the tornado of 1968 which destroyed their barn, the same storm that tore the Roof Garden of Arnolds Park apart. She marveled at the neighbors who came at once to clean up the barn and twisted trees.

Another fond memory was, when she and Bill traveled to Oklahoma for the Wheat Harvest one year. Bill drove a combine and Bobbie cooked. One day, while going to town she spotted an oil well, stopped and went up to it for a better look. She said, “Let’s climb up and ride that oil well!” So, she did!

Bobbie moved to WEL-Life Assisted Living of Spirit Lake in September of 2014 where she lived until her passing on August 24, 2021.