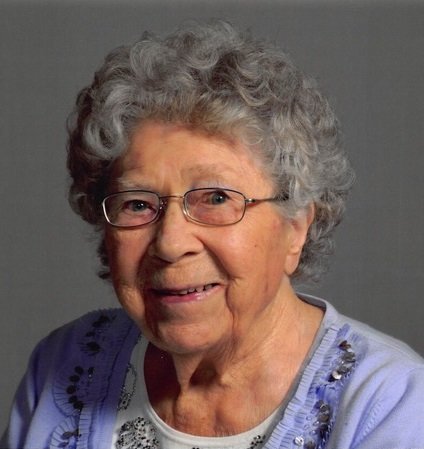 Alice Marie (Hood) Bonnell passed away peacefully at Accura Healthcare of Spirit Lake on September 15, 2019 surrounded by her family. Alice was born on a farm in Mallard, Iowa on September 1, 1914. Alice came from a strong Irish-German background and was the eldest of eight children. She attended St. Mary’s Catholic School in Mallard and graduated from Mallard High School with honors at the age of 16. Alice went on to attend Clarke College in Dubuque, Iowa with an academic scholarship and, in 1932, she graduated with a two-year teaching degree at the age of 18. Alice taught 5th and 6th grades at a number of different schools in Iowa during her teaching career, including Rolfe and Mason City.

Alice met her husband, Donald Bonnell, an Army Air Corp veteran in 1950 and they married in 1952. Their son, Robert James, was born in 1954 followed by their daughter, Ann Marie, in 1955. The family lived in Sioux City, Omaha, Chicago and Washington D.C. before retiring to Spirit Lake in 1976.

Alice was secretary and treasurer for the Northwest Iowa chapter of NAMI and was a member of the Okoboji Women’s Club, the Catholic Daughters and St. Mary’s church choir. She also served as the accountant for the Hood family farm for many years. Her hobbies included cooking, baking, collecting and sharing recipes, gardening, and observing nature.

Alice was an incredible optimist, a lifelong learner, a family peacemaker, a tenacious problem solver, and a devoted Catholic. Her life was spent caring for others with love, humility, understanding and forgiveness and her greatest treasure was her family.

Alice saw incredible and monumental changes in the world during her 105 years. She was truly, in life and deed, a member of the Greatest Generation, leaving a lasting impact on those who knew her.

Share Your Memory of
Alice
Upload Your Memory View All Memories
Be the first to upload a memory!