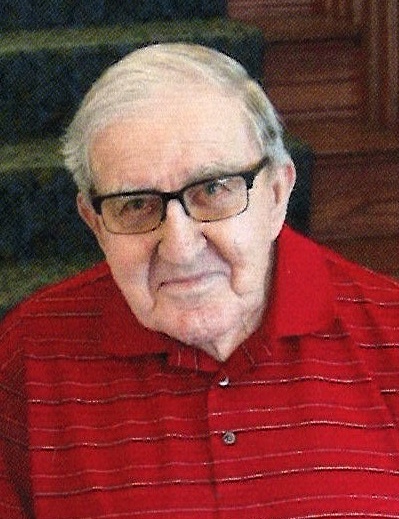 A funeral service for Wayne Blahauvietz, age 96, of Spirit Lake, will be held Monday, August 31, 2020 at 2:00pm at Turner Jenness Funeral Home in Spirit Lake. Visitation will begin at 1:00pm at the funeral home. Burial will be at Union Cemetery in Harris, Iowa.

Please click this link for the livestream https://youtu.be/1N0r-PIyEIQ. For those that choose to attend the visitation or service at the funeral home, you are asked to wear a face covering due to the current health concerns. Thank you for your understanding.

Wayne William Blahauvietz, Spirit Lake, IA was born on January 26, 1924 on the family farm in Sanborn, IA to John William and Onica Velma Blahauvietz. He grew up on the farm in Sanborn and went to country school through 8th grade.
He started high school in Sanborn and moved to the Harris farm in 1937 where he attended Harris High School and graduated in 1941. During high school he won letters in football and baseball, served as a class officer and was very active in 4-H. Wayne attended Iowa State College at Ames, IA for 4 quarters majoring in animal husbandry. He was active in Alpha Gamma Rho fraternity in college and was the oldest living member at the time of his death. Due to the war he returned to Harris and farmed with his dad on the family farm raising hogs and cattle along with production of row crops corn and soybeans. On the farm he was a jack of all trades: carpenter, mechanic, welder, veterinarian, electrician, plumber, architect and farm manager. As a young farmer he was very active in Rural Youth and became the State president of Junior Farm Bureau in 1947. Throughout the years, Wayne was innovative in his approaches to farming and worked to make farming fun and successful.

In 1947, he started dating Ruth Frohwein from Sanborn, someone he had met his first year of high school 10 years earlier. He proposed to Ruth on New Years Eve of that year. They married on June 13, 1948 and he built their home on the family farm in Harris. They had 4 children: Jeanne, Rob, Joni and Rick. Wayne and Ruth had 32 years of marriage before she passed in May, 1980.

Wayne was a very strong, quiet man, but it was evident that he missed married life and having the companionship. Luckily, he was introduced to Earline Hagen from Hartley, IA in 1981 and they married December 27 of that year. They were married for over 38 years giving him 70 years of wedded bliss. Wayne and Earline lived on the family farm until 1989 when they moved to their lake home near Crandalls’ Beach on Big Spirit. In 2016, they moved to Keelson Harbour in Spirit Lake.

Wayne was very active in and held leadership roles in Farm Bureau, Harris- Lake Park School Board, Osceola County Conservation Board, 4-H Leader, United Methodist Church in Harris and later Grace Lutheran Church in Spirit Lake, the Masonic Lodge and the Shriners. After retirement, he enjoyed the quiet lake life, fishing at the end of the dock, working in the yard, mowing at the farm and the lake, going to the Clay County Fair and was an Okoboji Summer Theater season ticket holder for years. He became an avid reader and would power through murder mystery books. He looked forward to helping with the planting and harvest every year and ran the combine until he was almost 90. Most of all, he was the most loyal Iowa State fan tuning in to enjoy football and basketball games as often as possible. He didn’t just watch, but could share all the statistics with anyone.

His family and friends would describe him as the most patient, kind, respectful man around. Wayne was a soft spoken leader and loved his family with an infectious laugh/giggle that affected us all and there were many times no one could catch their breath. He was a loving husband, father, grandfather and great grandfather and looked forward to visits from all his family.

Wayne passed away peacefully on Thursday, August 27, 2020 at the Lakes Regional Healthcare hospital with his family by side.