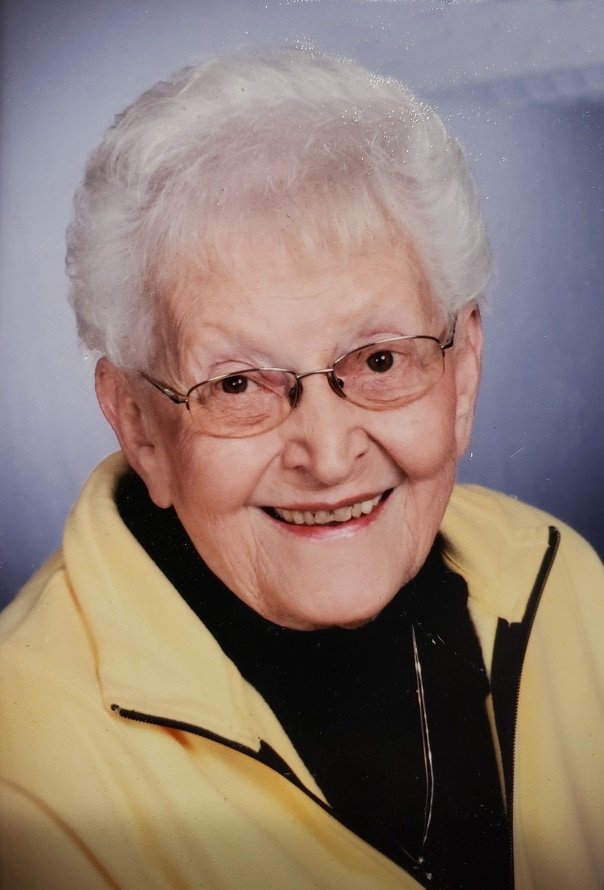 A visitation for Marie Wunder, age 88, of Milford, will be held Friday, November 27, 2020 from 3:00-7:00pm at Turner Jenness Funeral Home in Milford. Due to the current health concerns, the family will not be present at the visitation. A graveside service will be held Saturday, November 28th at 11:00am at Milford Cemetery.

Marie Theresa Wunder, the 5th child of Fred and Clara (Uhlenkamp) Sporrer, was born April 2, 1932 in Milford, Iowa. She was soon nicknamed "Babe" by her dad. She graduated from Milford Consolidated School in 1950.

On September 13, 1954, Marie was married to Denton Wunder in Des Moines, Iowa. After raising their four children, Marie and Denton started their family business, Wunder Upholstery, in Milford Iowa in 1987. After twenty-two years of Wunder Upholstery, Marie worked for L&D Upholstery from 2009-2020. Marie helped to start the FLC Cookie Walk and served on the committee for six years. Marie and Denton also served as Den Leaders for Pack #157 in Sutherland for six years.

Marie loved traveling, cooking and spending time with family and friends. After her husband passed away, she especially enjoyed her Christmas' and New Years' in Atlanta with her daughter, Terri and her husband, Chuck.

She is survived by her daughter, Terri Burleson and her husband, Chuck, of Atlanta, Georgia; son, Denton Wunder, Jr. and Lori Tielbar of Milford, Iowa; daughter, Leslie Sargent of Milford, Iowa; son, Chris Wunder and Kris Davis of Everly, Iowa; six grandchildren, eleven great-grandchildren, two great-great-grandchildren (and one on the way) and many others who knew her lovingly as Grandma; two brothers, Earl Sporrer and Jerry Sporrer; several nieces, nephews and many friends.

Share Your Memory of
Marie
Upload Your Memory View All Memories
Be the first to upload a memory!