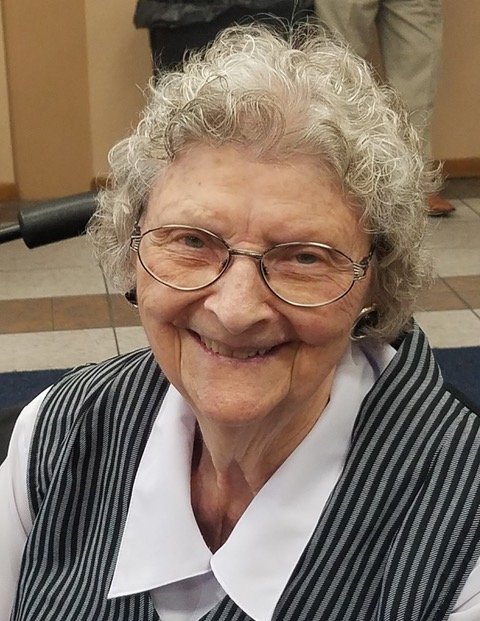 A Celebration of Life service will be held Saturday, December 19, 2020 at 2:00pm at Turner Jenness Funeral Home in Lake Park, Iowa. Friends and family may visit before the service from 12:00 - 2:00. Masks and social distancing will be required. Burial will follow at Silver Lake Cemetery.

Irene Pearl Peters, age 90, of Marshalltown, Iowa, left this earth Thursday morning, December 9th. She was in the care of the Iowa Veterans Home, also at Marshalltown.

Irene was born May 5, 1930, to John Louis & Gladys Louise (Cronkhite) Garloff in her Grandmother's bed at a farm near Harris, Iowa. She attended a brick country schoolhouse through 8th grade. Being the only child, she grew up helping work on various tenant farms her parents rented through the Great Depression, all in the Harris, Lake Park, and Round Lake area.

Following WW11, she caught the eye of a Navy Veteran hired to help with some work on the farm. After a brief courtship, Irene married Lloyd George Peters, formerly of Mason City, Iowa, on September 2, 1948. They set up house in Lake Park where Lloyd was hired at the local lumber yard. Irene worked for a while at a bakery until a daughter arrived, Karen Louise, in 1952, and later a son, Brian Louis in 1960.

Lloyd liked the lumber business, and in order to advance his career, the family left Lake Park in 1962. Through the years, the family also lived in Orange City, Iowa; Adams, Minnesota; Glencoe, Minnesota; Newell, Iowa; and finally Marshalltown, Iowa in 1975. Through all the moves, Irene diligently created a warm inviting home wherever they were, and raised their 2 children. Irene was happy to remain a wife, mother, and homemaker her entire life, enjoying being at home with her family.

Following Lloyd's retirement in 1984, the couple moved into the Iowa Veterans Home in 2003. Lloyd passed in 2006, but Irene remained there and considered it her home for another 14 years.