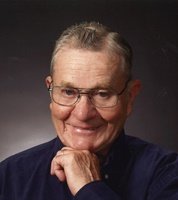 A Mass of Christian Burial for Ken Baschke, 92, of Milford, will be held Tuesday, December 29, 2020, at 10:00 am at St. Joseph Catholic Church in Milford. Burial will be at Calvary Cemetery. Visitation will be on Monday, December 28th from 3:00-7:00 pm with the family present from 5:00-7:00 pm at Turner Jenness Funeral Home in Milford. There will be a Prayer Service at 6:30 pm at the funeral home.

For Livestreaming of the service please click the following link:
https://stjosephmilford.org/funeral-live-stream

Ken was proud of his military service in the US Army in the Korean War, 29th Infantry Co D from 1951-1953.  He returned home where he married the love of his life, Colleen Spencer, on November 12, 1953, at St Joseph’s Catholic Church in Milford.

Ken, with his brothers, Bud and Donnie, owned Baschke Produce until 1971 and then worked as a custodian at St. Joseph’s Catholic Church and School in Milford.  He found great pleasure in working as a property manager for several lake residents for many years, retiring when he was 80 years old.

Ken was a member of the Knights of Columbus, VFW, American Legion and was a Eucharistic Minister at St. Joseph’s Catholic Church. In his younger years, he enjoyed stock car racing with his brothers.  He and his brothers also enjoyed years of golfing.  Ken was always ready for a game of cards whenever the opportunity arose.

Ken passed away December 22, 2020, at Accura Healthcare in Milford, Iowa at ninety-two years of age.