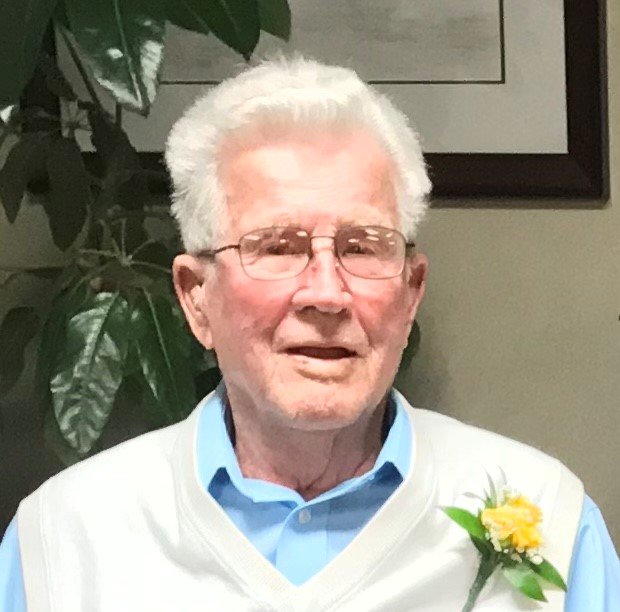 He served 2 years in the army in the Pacific during World War II, and at 99 years of age, he was one of the few surviving members of the “Greatest Generation,” those veterans who served in World War II.

After the war, he farmed in the Calumet area until 1969, when he retired from farming in 1969, moved to Aurelia, Iowa, and worked at Wilson Foods in Cherokee until he retired in 1985. Upon retirement, Dalton and Verna moved to Okoboji, Iowa, where he continued to work for many years as a handyman and painter, while enjoying his hobbies of fishing and golf. For many years, they also enjoyed spending winters in Arizona.

In 2018, Dalton and Verna, moved to the Twin Cities to be closer to family. Until a few weeks before his death, Dalton continued to live independently at Augustana Apartments in Minneapolis.

Dalton passed away on February 28, 2021, at the Episcopal Home in St. Paul. He was preceeded in death by his wife Verna, in 2019, and a daughter Julaine in 1959, as well as a brother, Harold Mugge, and a sister, Mae Pierson. He is survived be three children, Joel Mugge, of Palm Springs, CA; Janelle Menke, of Bemidji, MN, and Jay Mugge of Armstrong Iowa. He is also survived by a brother, Arlo, of Spencer, IA, 4 grandchildren, and 5 great-grandchildren.

He will be remembered as a devoted husband, and a loving father, grandfather and great-grandfather who was warmly regarded as a kind and humble man whose spirit brought joy to those who knew him.

He will be honored at a private family service followed by internment at Liberty Cemetery in Calumet, Iowa.