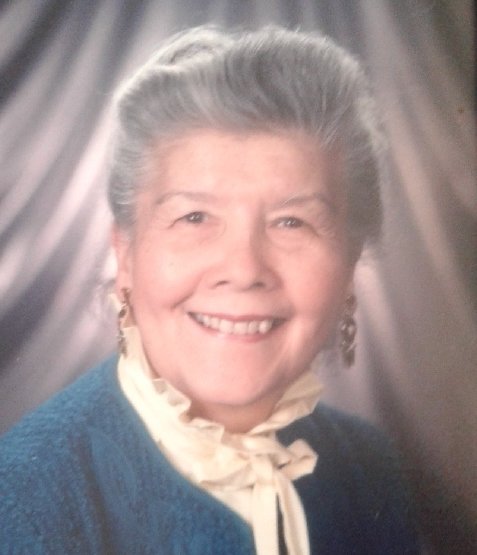 A funeral  for June Goldman, 95, of Spirit Lake, will be held on Friday, June 11th at 2:00 p.m. at the Spirit Lake United Methodist Church.  Interment will be at Lakeview Gardens Cemetery in Okoboji.

Visitation will be at the Turner Jenness Funeral Home in Spirit Lake, Iowa on Thursday, June 10th between 3:00 and 7:00 p.m.

In lieu of flowers, June may be honored through donations to the Humane Society of Northwest Iowa, Discovery House, or the Spirit Lake United Methodist Church in support of their mission and service projects.

Katheryn June Parker Goldman was born to Johanna (Julie) and Charles K. Parker on June 25, 1925, in Kobe, Japan.  Her Japanese name, Sachiko, translates as "child of bliss/happiness".  She never went by Katheryn but was always June, or as her father liked to call her, Miss Chrysanthemum or June Bug.  She attended the Canadian Academy in Kobe. Her classmates hailed from all over the world and she developed lifelong friendships there.  She spent many summers at Lake Nogiri swimming and playing tennis.  She became good enough at tennis and the 100 meter dash to enter the Junior Olympics in Japan.

As the clouds of war were gathering and her parents became concerned for her safety (citizens of Allied countries living in Japan had to wear yellow armbands), June was sent to the U.S. in early 1941 to live with her grandparents in Pittsfield, Massachusetts.  The war came with the family still separated and it was many months before June had any word of her parents' fate, but they were reunited in late 1942 as part of the only exchange of persons between the U.S. and Japan during the war.

June graduated from Pittsfield High School and Wellesley College, where she majored in sociology and fell in love with a Boston University seminary student with a curl in the middle of his forehead.  She and Max Goldman were married Sept. 6, 1947, and embarked on a 49 year journey together.  They had three children - Stuart, Candace and Jennifer.  The need for more pastors in the Midwest landed them in Iowa, which became their true home.

Not one to sit for long, June flowered as a public speaker and activist against racism, which she experienced first hand.  She was appointed by Gov. Harold Hughes to the first Iowa Human Rights Commission and was a member of the “Know Your Neighbor” panel, a diverse group of women who traveled all over the country giving presentations on healing racial wounds by telling their stories.  It was quite an adventure, especially in cities with great unrest.

June wrote two books, “Search Every Corner” and “To Touch the Sky.” She was nominated for and entered the Mrs. Iowa contest (part of the Mrs. America event).  Her family found this hilarious, familiar as they were with her homemaking skills, which was part of the contest judging.  She did not win.  The family was not surprised.  But, in 1978 she was honored as the Iowa Mother of the Year.

Having grown up with dogs, June was a lover and defender of animals.  When she and Max retired to the lakes area, their doorstep became home to several cats in addition to their indoor feline.  She soon gained a reputation as the go-to person to help rescue a variety of animals, including an injured pelican she named Emily after one of her grandchildren.  This burgeoning animal whispering service led her to join forces with other area animal lovers and establish the Humane Society of Northwest Iowa.

It takes a lot of political maneuvering to set up an animal shelter.  Having  flexed those muscles, June honed in on the Dickinson County Board of Supervisors, on which she served for 16 years.  Her retirement treat was a trip back to Japan with her daughter Candace.  She traveled widely, including a trip around the world when she was just five.

June lost Max in 1997.  She continued to serve as the lay preacher for the Fostoria United Methodist Church (10 years) and felt very supported by that community. In 2002 she connected with an old family friend.  A whirlwind romance ensued and she and Karl Kiilsholm were married in September of that year. She and Karl had 16 years together. They enjoyed several cruises together, including to both the North and South Poles! Karl introduced her to his native Denmark, where they even attended a royal wedding, and June picked up a few Danish phrases and a fondness for Danish food.

June enjoyed young and old alike, and worked for Westmar College and the Area Agency on Aging. She was involved in church and civic activities and roles over the years too numerous to list here.  She was an enthusiastic cheerleader at the Winter Games, and loved the chili cook off.  She loved Christmas and left her tree up for many years; eventually it became a universal holiday tree with decorations celebrating everything from Christmas to the 4th of July - very inclusive.  That was June.  Everyone was welcome at the table.  A pot of tea or coffee was always handy with a little something to munch on while enjoying much laughter and wide-ranging conversation.  Then she would send you out with love.  We send her out with love now, to her eternal home where we know she will not sit still, but will engage the universe with open arms, ready to receive God's grace and join the Kingdom of Heaven with joy.

June was truly a blessing to her family: son Stuart and daughters Candace and Jennifer (Mark); grandchildren Sergio (Astrid), Abby (Tim) Christian, Nicole (Pedro); great-grandchildren Carlos, Sofia, Andrea, Hailey Mae, Carson, and Elise. We will miss you, mom, and are grateful for the happiness you will find in your eternal home with family and friends.