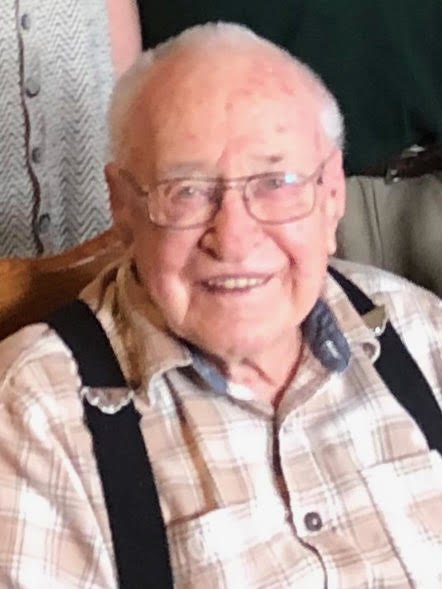 Robert Henry Bruett was born December 19, 1922, to Henry E. Bruett and Mary Katherine (Locey) Bruett in a farm home in Dickinson County, Iowa two miles northwest of Montgomery, Iowa. He was the first born of three children. He had two years of school at a small country schoolhouse two miles up on a hill from home. The family then moved to Excelsior Township southwest of Lake Park on a farm in 1928.

Bob had polio in 1929 and was quarantined on the farm for two weeks. In 1938, his left leg had to be operated on so he would walk better. He was 16 years old when he had surgery.
Bob graduated from Excelsior school in 1944.

In 1946, Bob married Arlis Jeanne Lago, his high school sweetheart. He then worked for an electric company in Lake Park for two years followed by a year with his dad and brother at Bruett Hardware. After that he spent one year in Sanborn, Iowa at a hardware store. In 1950 he moved to Spirit Lake and worked for Floyd Thomas Refrigeration and started his refrigeration work. In 1960, Bob worked for Avery and Benzer Hardware and a year later started his own company, Bob Bruett Refrigeration. He retired in 1994.

In earlier years, Bob played fast pitch softball for a town team from 1952 to 1974. He also played golf from 1975 to 2010. He joined the Spirit Lake Fire Department in June of 1965. In 1975, he became the Fire Chief until his retirement in 1994. He retired from his company and the fire department in the same year. Bob was a member of the fire department for 28 years, Fire Chief for 18 years.

As a loving husband, father and grandpa he cherished time with his family.  His free time was spent hunting, fishing, golfing, bowling and woodworking.

Bob was preceded in death by his parents, brother George (Bill) Bruett and sister LaBerta Andre.

Share Your Memory of
Bob
Upload Your Memory View All Memories
Be the first to upload a memory!
Share A Memory