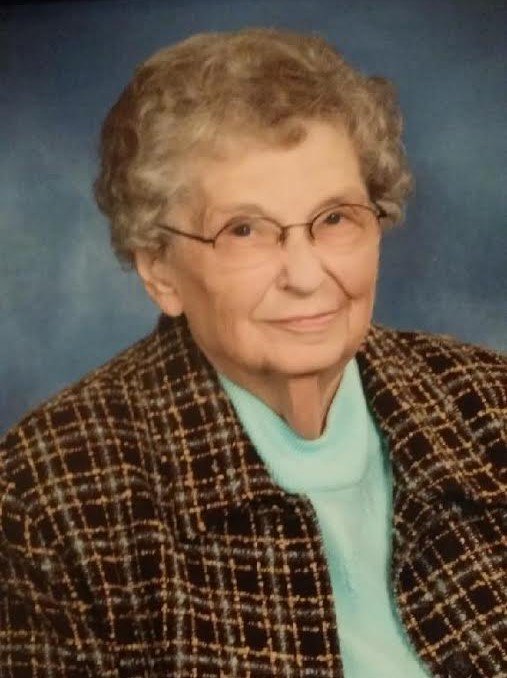 Funeral services for Eloise Goodell, age 92, of Sibley formerly of Lake Park, will be held on Wednesday, August 11, 2021 at 11:00 a.m. at the United Methodist Church in Lake Park. Burial will be in the Silver Lake Cemetery in Lake Park.

Margaret “Eloise” (Timmons) Goodell passed away peacefully on Friday, August 6, 2021 at the age of 92. Eloise was born on December 18, 1928 in Ocheyedan, Iowa. She was the youngest child of Edward “Lee” and Hazel (Hench) Timmons. She grew up on a farm east of Ocheyedan, and graduated from Ocheyedan High School.

Eloise taught two years in a country school near her home in rural Ocheyedan prior to meeting her husband, Clayton Goodell. Eloise and Clayton were married on April 2, 1950 in Worthington, MN. They lived and farmed on the family farm south of Lake Park until their retirement from farming, and then moved into town. They were married for almost 51 years prior to Clayton passing away in 2001. Eloise has been a resident at Sibley Specialty Care since January 2017.

Eloise worked at Vacation Village/Village West as a head cook and in housekeeping.   She was a member of Eastern Star, the United Methodist Church, and the Lake Park American Legion Auxiliary. As her children were growing up, she taught Sunday school and was a 4H leader. Eloise enjoyed reading, sewing, cooking, watching and feeding the birds and squirrels. She especially enjoyed spending time with her children, grand-children, and great grand-children, along with her grand dogs.

She will be lovingly remembered by her family and friends.