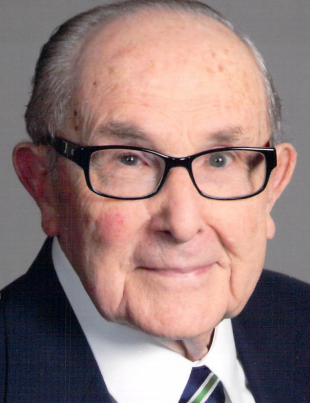 Marvin William Stockdale, 97, of Spirit Lake, died on Friday, August 27, 2021. Memorial services will be held on Friday, September 3, 2021 at 10:00am at the First Presbyterian Church in Spirit Lake. Burial will be in the Harrison Township Cemetery in Swea City. Visitation will take place prior to the service from 9:00-10:00 a.m. at the church.

Marvin was born on February 3, 1924, to William and Irene Stockdale on the family farm located between Aplington and Austinville, Iowa.  As a boy, he worked on the family farm, including planting with his favorite horses Ginger and Belle. He graduated Aplington High School in 1941 before enrolling in Ellsworth Junior College and taking a job as a reporter with the Waterloo Courier.  But in 1942 Marvin enlisted in the United States Naval Reserves.

While in Naval flight training, he married his sweetheart, Anita.  Following Marvin’s military service, the couple returned to Iowa, and Marvin resumed his job with the Waterloo Courier.  In 1946, the couple had their first son, Ned. And Marvin continued his education, graduating from the University of Iowa with a bachelor’s degree in commerce. The family moved to Pomeroy, and Marvin worked for Midwest Timmermann.

After many years in Fort Dodge, Marvin and Anita retired in Okoboji.  Eventually, they moved into the Keelson Harbour assisted living facility in the area.  There they made many friends and memories. Following Anita’s passing, Marvin started the Keelson Harbour Rhythm Band with fellow residents.The group performed several times for fellow residents and the community.

Marvin, a natural musician, loved music and performing.  He also enjoyed nature and was known for taking his family camping and hiking in his younger years. He was a gifted cook and baker, famous for his hard-tack candy, ginger snaps, and many more treats.  He worshiped at First Presbyterian Church in Sprit Lake.

Marvin is survived by his son, Thomas (Peg) Stockdale of West Des Moines; his daughter-in-law, Marilyn Stockdale of Omaha; grandchildren Morgan, Owen, Michael, David, Kara, Katie, Mark, Adam, and Ann; and ten great-grandchildren.  He is preceded in death by his parents, his brothers Vernon and Harold, his wife Anita, his sons Ned and William, and daughter-in-law Joanne.

Memorials may be made in Marvin’s name and directed to First Presbyterian Church, 3501 Hill Avenue, Spirit Lake, Iowa 51360.

Share Your Memory of
Marvin
Upload Your Memory View All Memories
Be the first to upload a memory!
Share A Memory