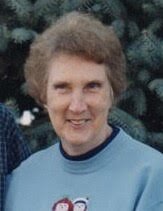 Patricia Alice Dingel was born on June 19, 1931 in Spirit Lake, Iowa to Ivan and Dorothy (Vederstrom) Timmons.  She attended school in Ocheyedan, participated in class plays, and enjoyed playing basketball.  She was valedictorian of her 1949 Ocheyedan High School graduating class.

Pat married Donald Dingel on August 28, 1949 at the Ocheyedan Methodist Church.  Pat and Don farmed near Ocheyedan and Harris raising 5 children, various crops, cattle, chickens, hogs, and sheep for a short time.   As a farmer's wife, she fixed countless meals and field lunches, canned and froze garden produce, sewed clothes and attended activities for her children, and referred to herself as Don's hired man since she helped with almost all aspects of farm life.

In 1977, Pat and Don moved from the farm to their Silver Lake home and occasionally enjoyed the benefits of living by the lake and golf course.  Retirement from farming in 1994, provided increased time for golfing in couples and ladies golf leagues and viewing sunsets   including the reflection on the lake.  Square dancing with the Turkey Trotters, campouts with the Stateline Travelers with participation in the games, traveling in the United States and abroad, playing cards at the Ocheyedan Senior Center or with other friends, and always having a book or two close at hand were favorite activities.  As “Winter Texans” for more than 30 years,  Pat and Don spent part of each year enjoying the weather and park activities. She was a lifelong member of the Ocheyedan Methodist Church serving in The Ark group and other positions.  Pat was also a member of O'Sirrah Women's Club and Sewing Club (which later played cards) for many years.  She became a dedicated blood donor in her later years.

Pat's most treasured times were family gatherings including Dingel Christmas.  Favorite foods including cheesy hashbrowns, fruit salad, grandma's frozen sweet corn, and no bake cookies became traditions her children and grandchildren requested.  She put others ahead of herself, demonstrated enduring patience, might have shared a sarcastic but humorous comment or two, with her competitive side showing on occasion especially during card games.

Pat passed away on August 31, 2021 at the age of 90.  Preceding her in death were husband Don in 2017, her parents, infant sisters Dorothy Belle and Nancy Rose, siblings Gloria Schaffer and Duane Timmons, and granddaughter Carrie Ann Dingel.  Remembering her with love are her children Dennis (Barb), James (Janet), Sandra (Mike), Judith (Steve), Brian, 16 grandchildren and 17 (plus 1 in January) great-grandchildren as well as her sister Virginia Verdoorn, nieces, nephews, neighbors, and friends.  She will be missed by many.