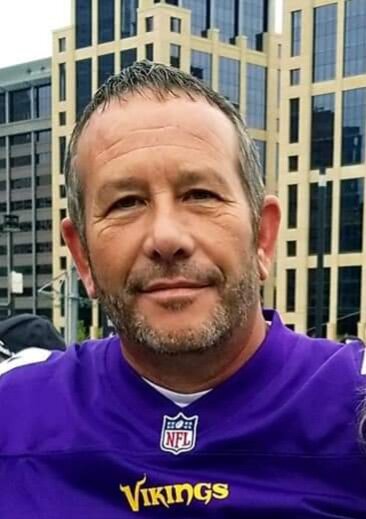 A funeral service for Justin Champine, 51, of May City, will be held Friday, September 10, 2021 at 2:00pm at the Milford Community Center. Visitation will be on Thursday, September 9th from 4:00-7:00pm at Turner Jenness Funeral Home in Milford.

Justin Lee Champine, the son of Kenneth and Irene (Fish) Champine, was born April 22, 1970 in Milford, Iowa. He graduated from Milford High School in 1988 and later moved to May City, Iowa in 2018.

On February 16, 2019, Justin was married to Amber Lee (Stevenson) in Las Vegas, Nevada.

Justin enjoyed watching the Vikings and the Hawkeyes. He loved pheasant hunting with his beloved dogs, Maggie and Daunte, working on Beth, his Nova and enjoyed building homes. He was a man of many talents! Justin was currently working as the Director of Business Development at RDI Industries.

Justin passed away September 4, 2021 at fifty-one years of age.

Justin was preceded in death by his father, Kenneth Champine and best friend, Jason Farrel.