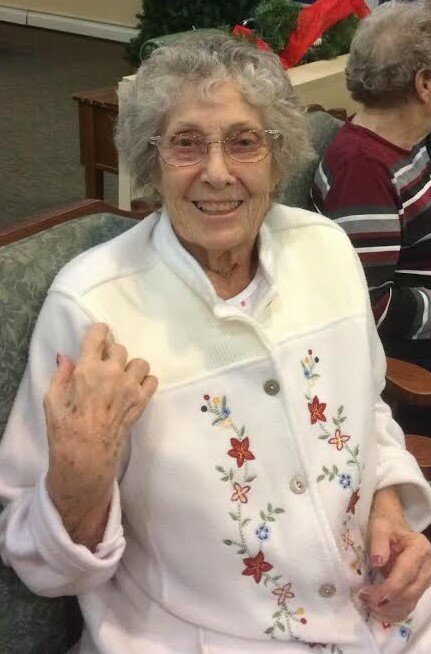 A funeral service for Elaine Smith, age 90, of Lake Park formerly of Spirit Lake, will be held on Saturday, November 20, 2021 at 2:00pm at the Turner Jenness Funeral Home in Spirit Lake. Burial will be in Lakeview Gardens Cemetery in Okoboji. Visitation will take place prior to the service from 1:00-2:00pm at the funeral home.

To watch the recording of the funeral service, click the following link- https://youtu.be/mNVjrbnJFzo.

Elaine Fay Densmore Smith passed away peacefully in her sleep on November 15, 2021 after a long battle with Alzheimer’s Disease. She was 90 years old when welcomed into the arms of her Lord and Savior. She was born July 2, 1931, in Earling, Iowa, to Forrest Fay and Eva (Mayer) Densmore. The family moved to a farm near Dunlap, Iowa and Elaine graduated from Dunlap High School. After graduation, she worked for Mutual of Omaha Insurance.

She was united in marriage to Eugene Paul Smith of Woodbine, Iowa, on October 30, 1950. They had four children, Diane, Debbie, Kandi and Kirk. Elaine and Eugene moved to Arizona in 1953, settling in Sierra Vista. Their last three children were born in Arizona and Elaine worked as a Fort Huachuca civil service secretary while raising her family.

Eugene and Elaine loved to travel and packed up all four kids ages two months to 14 and traveled to Charleston, South Carolina during Eugene’s civil service assignment with the Fort. While there they lived two blocks from the ocean on the Isle of Palms. They enjoyed family fishing trips to the ocean near Hermosillo, Mexico, and many Sunday picnics in the Huachuca Mountains near their home in Sierra Vista. Elaine and Smitty had many friends and the families often got together. While the parents played Pinochle, the kids ran and played and had so much fun.

The family moved back to Iowa in 1966 when Eugene became the Superintendent of Municipal Utilities in Manilla, Iowa. At the age of 42 Elaine went to college and earned her Licensed Practical Nursing degree. She worked in nursing homes and had a big heart for the residents in her care.

Elaine followed Eugene’s utility management career to Harlan, then Coon Rapids, Iowa. She worked for a doctor in Coon Rapids and owned a store that featured t-shirts and ceramics. She loved making cute t-shirts for the grandkids. The family still has many of the ceramics she created. Elaine’s favorite pastime was going to garage sales and she seldom passed a yard sale sign without stopping to explore. The family enjoyed many Canada and Minnesota fishing trips.

Eugene and Elaine retired in Spirit Lake, Iowa, wintering in South Padre Island, Texas. Eugene passed away in 1995, a big adjustment for Elaine because they shared such a close bond. She was Gram to her grandkids and loved spending time with them, making chocolate chip cookies, banana bread and taking them on boat rides. Elaine was a dog lover and especially liked standard poodles.

She was preceded in death by her parents, husband Eugene, grandchildren April, Davey and Timothy Joens and Zachary Smith; and siblings Orland Densmore, Eunabelle Brewster, Darlene Carrigan and Darrel Densmore.

Share Your Memory of
Elaine
Upload Your Memory View All Memories
Be the first to upload a memory!
Share A Memory