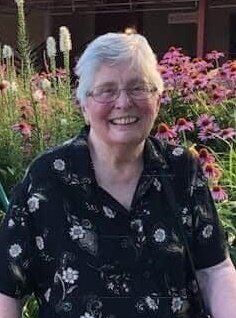 Sue Helen (Seidel) Bernier, daughter of Leonard and Helen (Tuel) Seidel, was born at the Minnie Calkins Maternity Home in Milford, Iowa, on December 8, 1935. She grew up on her parents’ farm along with her older sister Sally and her younger brother Murray near Lake Park and attended Excelsior High School, graduating in 1953.

On August 5, 1956, Sue married LeRoy Paul Bernier at the United Methodist Church in Lake Park. To this union, they were blessed with five children: Philip, Linda, Nancy, Christine, and Paul. Sue and Lee made their first home near Everly and later moved to the family farm near May City. Sue was a dedicated mother and farm wife. In 2001, she moved to Hartley, living near her daughter Linda and sons Phil and Paul. Her daughters Nancy and Christine were frequent visitors at her home. The entire family rallied around to support Sue to allow her to live in her home as long as possible. She remained in Hartley until moving to her daughter Christine’s home in 2021.

In 1984, Sue became a dedicated professional at the Community Memorial Health Center (CMHC) and worked there for 25 years as the Dietary Supervisor. After retiring, Sue volunteered frequently at CMHC, serving coffee to visitors and playing cards with residents.

When her daughters were young, Sue was an active 4-H Leader for 12 years. She was a longtime supporter of the Okoboji Summer Theatre and Spencer Community Theatre. One of her fondest memories was attending a 2017 Kris Kristofferson concert in Cedar Rapids with her daughter Nancy. She traveled throughout the U.S., taking numerous group tour trips and visiting presidential libraries with her friend Betty Morfitt. Sue was politically active as a lifelong Democrat, and she served as a volunteer poll worker for many years. She belonged to the Duo Decem Club for several years and later participated in Hartley’s Red Hats. She was also an avid reader and longtime Hartley Library volunteer and enjoyed knitting, crocheting, and Soduku. Sue was known for her bright, cheerful smile and sweet, generous nature.

Sue was preceded in death by her parents and husband.

A memorial reception and luncheon will take place at the May City Fire Station on December 11 from 12:30 to 3 p.m.

This event is open to the public.

For those unable to attend, condolence cards can be sent to:

Memorial gifts may be made to the “Family of Sue Bernier” and directed to the above address or to the United Community Bank—Hartley.

Memorial contributions will be donated to the
Hartley Library, the Okoboji Summer Theatre & the May City Fire Department.

Share Your Memory of
Sue
Upload Your Memory View All Memories
Be the first to upload a memory!
Share A Memory