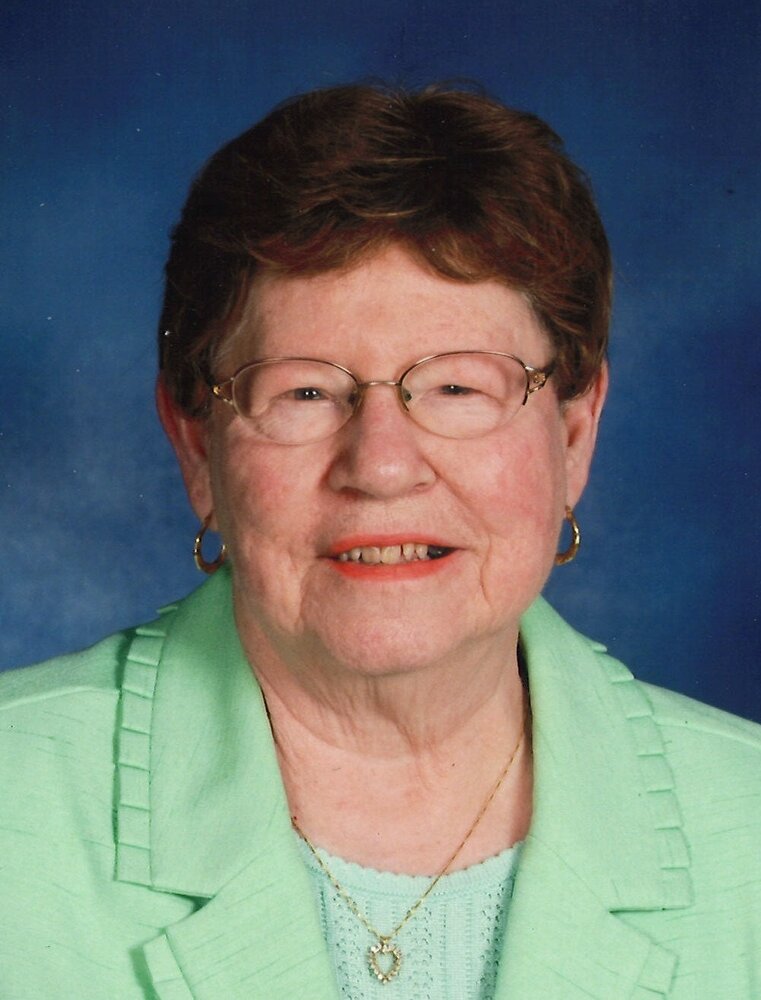 A funeral service for Gwendolyn Vetter, 90, of Spirit Lake, will be held Saturday, February 12, 2022 at 10:30 AM at Immanuel Lutheran Church in Spirit Lake. Visitation will begin one hour prior to the service at the church. Burial will be at Memory Gardens Cemetery in Spirit Lake.

Gwendolyn "Gwen" Rosella nee Kreisel Vetter was born in Royal, Iowa on October 31, 1931 to Leona and Walter Kreisel. Whenever anyone would comment to Gwen that she was born on Halloween, she would respond, "No, I was born on Reformation Day - I was born to be a Lutheran!" And a devout Lutheran and Christian she was, serving as a Sunday School Teacher, on the Altar Guild, in Ladies' Circle, in the choir, in the making of banners and Chrismons and in many other ways at Immanuel Lutheran Church in Spirit Lake and at the St. Luke's Lutheran Auxiliary in Spencer.

Prior to Gwen's sudden passing, at age 90, on February 3, 2022, she rarely considered herself "too old". She selflessly and joyfully taxied her friends, near her age, from the assisted-living or nursing home to and from church regularly. Bestowed of a servant's heart, she was most happy giving and sharing her resources and preferred to never be a burden to others.

Gwen grew up in Arnolds Park and in her teen years, her family moved to a farm near Lake Park, Iowa where she grew up with her sisters, Donnabelle, Sharon, Rita, Pam, Connie and her brother, Dick. She graduated from Lake Park High School and began working as a Candler of eggs and later as a Telephone Operator for Northwestern Bell in Spencer. She retired from Northwestern Bell after thirty-one years of service.

On November 13, 1954, she married Quentin Graff, also from the Lake Park farming community, after courting for ten years. They moved to Chicago, Illinois. Quentin became ill and died in 1956. Gwen returned to Iowa, settling in Spirit Lake.

On October 20, 1967, she and Leslie Vetter married in Sioux Valley, Minnesota. Gwen joined Leslie and his four children, Lyle, George, Carey and Bette on the farm west of Spirit Lake. Unintimidated by becoming an instant mother and co-farmer of a sizable farm, with over 100 cattle, 100 chickens, pigs, geese, lambs and an ornery pony, Gwen rolled up her sleeves and set her sights on "getting it done".

After the children were raised and had left the home and she had retired from Northwestern Bell, her second husband passed away October 5, 1987. Within a couple of years, Gwen returned to living within the town of Spirit Lake.

In her retirement, Gwen enjoyed traveling with her friends, making new friends and investing time with long time friends, her church family and her own family. She has been a good and faithful servant to her God, to her friends, to her community and her family and strong supporter of World Missions. She was actively involved in American Legion, Farm Rescue, Good Neighbor Fund and many more.

She is preceded in death by her two husbands, Lyle Vetter, her brother and three siblings.

Share Your Memory of
Gwendolyn
Upload Your Memory View All Memories
Be the first to upload a memory!
Share A Memory