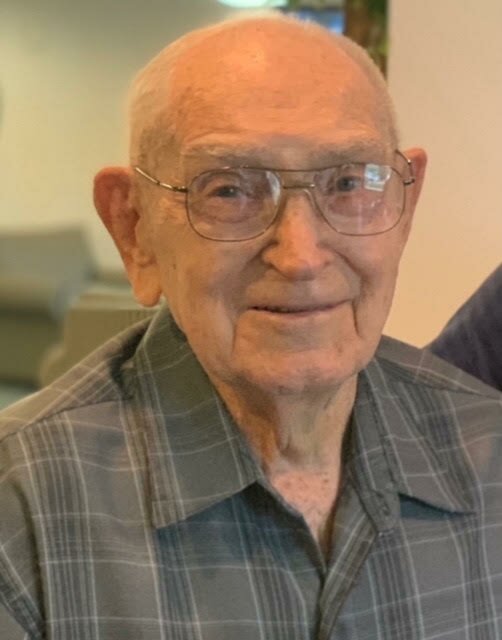 A funeral service for Verne Hansen of Milford will be held on Saturday, February 12, 2022, at 2:00pm at the Harbor of Joy Lutheran Church in Milford. Burial will be in the Milford Cemetery. Visitation will take place prior to the service from 1:00-2:00pm at the church.

As a young boy he would spend early mornings trapping on his way to school. He attended rural schools in Clay County. He graduated from Spencer High School in 1941. He enjoyed playing football and was the kicker all four years. He will always be remembered as the man with the educated toe. In state track he threw the Javelin for a school record that still stands today. He was active in FFA and 4-H during his high school years.

Verne joined the Navy the day after Pearl Harbor. He served three years in Trinidad. He was a machinist first class and worked on small crafts in the harbor that carried depth charges. He ended his service in Okinawa in 1945 when the war ended.

He married the Love of His life, Kathryn Marie Martin on December 26th , 1945. In the Spring of 1946 he started farming and enjoyed farming for 37 years. He liked to compete in county yield contests. He liked having FFA corn yield plots on his farm comparing the yields of the different varieties of corn. He was a Pioneer Seeds salesman where he enjoyed visiting with the neighbors.

Verne enjoyed league bowling many years. He started bowling in Milford where they had pin setters. He had the first 300 game bowled at the 20th Century Lanes in Spencer, Iowa. He was president of the 300 League at the 20th Century Lanes in Spencer many years. He bowled 34 times in State and National tournaments. He also enjoyed golfing many courses with 3 hole in ones. The last one at age 91.

He was very dedicated to his faith. He helped pay for the stain glass windows both at First Lutheran & Harbor of Joy. He and Kate made quilts for the Lutheran Camp Okoboji Quilt Auction many years. He remembered attending the camp in the same location as today at the age of 8.

Verne & Kate moved to Wahpeton on West Lake Okoboji after retiring from the farm and spent many winters at Tropic Star Park in Pharr, Tx where they enjoyed square dancing, bowling & golf.

Verne passed away peacefully February 7, 2022 at the Accura Care Center in Milford.