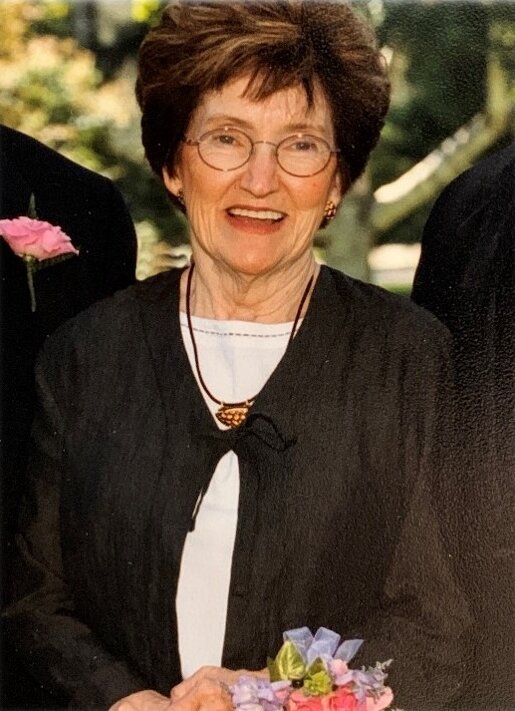 Sally passed on March 25, 2022 at Accura Healthcare in Milford.

Sally Fairchild, the only daughter of Frank and Florence (Delaney) Riley was born at Dr. Dolan Hospital in Worthington, MN on October 25, 1927. She grew up on the farm her grandfather, Matthew Riley, homesteaded when he came from Ireland. All of her grandparents were born in Ireland and many hoped to die there.

After attending County School District 117, Sally graduated from the Sioux Valley, MN High School in 1945. In 1949, she graduated from the College of Saint Benedict in St. Joseph, MN with a B.A. and majors in English and Drama. She also studied French. After teaching High School English, Speech, and Drama in Minnesota high schools for five years, she moved to Terril, Iowa where she continued to teach and direct students on the stage for several years.

On July 11, 1955, she married, life-long Terril resident and United States Postmaster, Daniel Fairchild at Saint Mary's Roman Catholic Church in Worthington, MN. The couple moved to the “Red House” on the north edge of Terril. Here they welcomed 7 sons and 1 daughter.

Sally led her children through the untimely death of two of her sons in 1978 and her first husband in 1982.  After Dan’s death in 1982, Sally stayed in the "Red House" with her three minor children. On June 19, 2004, she married Ralph Nordstrom of rural Lakefield, MN at St. Joseph Catholic Church in Milford, IA. The couple lived in the Red House until 2012.

Sally was a convent educated scholar and an imaginative grandmother who could quote Yeates, Shelly, or Shakespeare, as easily as she signed herself (in the name of the father and of the son and of the Holy Spirit ) in French, or host tea parties for toddlers. She was lovely, loving, and smart, but she was fierce, too! There are stories!

Mass of Christian Burial will be at St. Joseph Catholic Church, where Sally was a member for more than 65 years, in Milford, Iowa on Tuesday March 29, 2022, at 10:30 a.m. with burial to follow in Calvary Cemetery in the Fairchild plot.

Her children were her greatest joy and pride.They were all baptized and confirmed at St. Joseph Catholic Church in Milford, Iowa and graduated from the High School in Terril, Iowa. She would frequently boast: each is a taxpayer and a Roman Catholic. Sally was grateful for her two loving husbands, her good children, and her great daughters-in-law and son-in-law.  Sally's absence will be felt by many and for years to come. A model of strength, humor, and goodness leaves us.  She will be missed.