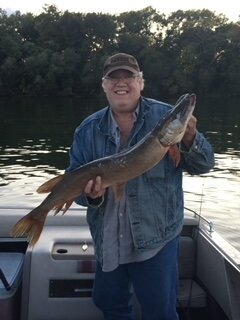 Ed Black was born on August 14, 1961, in Fort Dodge, Iowa to Dale and Jean. Recently diagnosed with cancer, Ed passed away peacefully surrounded with love on April 4, 2022.

Ed grew up in the Fort Dodge/Moorland/Gowrie area. He attended school at Prairie Community Schools in Gowrie. He married at 18 to Kathleen Vladeff and had three sons. In 1988, he was united in marriage to Karla Doty in Fort Dodge. They were married 33 years and had three children, two daughters and a son. They have six grandchildren; Joey, Anna, Willa, Isabella, Otto, and Aurora.

Eddie played music throughout the state of Iowa, starting with his dad’s band as a teenager. He was a drummer with several bands over the years. One of Ed’s biggest passions was playing music with his children.

Ed’s greatest joy was spending time with his family. He cherished being a grandpa, teaching them to fish and enforcing the “no rules at grandpa’s house” rule. He had a special place in his heart for his puppies, Grizz and Bandit, which was made clear by the amount of puppy pictures on his phone.

Ed was loyal to the ones he loved and to his Hawkeyes and Vikings. He was sarcastically funny and an avid storyteller. Ed was his own man. He had his own set of principles and had the integrity to follow them. He loved to laugh and make people laugh. Even though he had pain, he didn’t complain and felt blessed with the life he had with his family. He will be missed by those he loved and will live on through their memories.

There will be no services at this time.