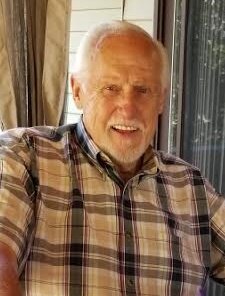 A funeral service for Cloy Goetsch, age 83, of Andover, Minnesota formerly of Terril, Iowa will be held on Saturday, June 4, 2022 at 10:00am at Immanuel Lutheran Church in Spirit Lake. Burial will be in Lakeview Gardens Cemetery. Visitation will take place prior to the service from 9:00-10:00am at the church.

Cloy Dale Goetsch, 83, of Andover, Minnesota passed away unexpectedly on May 27th, 2022.

Cloy was born on August 23, 1938, in Kerrick, Minnesota to Harry and Della (Probst).  After graduating from Terrill High School in 1956, he attended Estherville Jr. College and eventually the University of Minnesota. In high school, he played football, basketball, baseball, and ran track, and went on to play football in college.

On August 16, 1956, Cloy enlisted in the United States Navy. During his time of service, Cloy earned a rank of FT2 (E5) and served during Vietnam on the U.S.S. Osbourn. Cloy was released from active duty and transferred to the Naval Reserve on July 29, 1959. He was honorably discharged on August 15, 1962.

While visiting his landlady in the hospital in Birmingham, Alabama, he met Carole (Focht), who was working as a nurse at the hospital. They married on June 12th, 1963 in Birmingham and had two daughters, Colette and Cheryl. The family moved to numerous states with Cloy's job at Control Data before settling in Coon Rapids, Minnesota.  As empty-nesters, they built their dream home in Andover, Minnesota.

Cloy worked as a Systems Manager at Control Data where one of his roles was as a Senior Program Manager for NASA.  He was proud to have been a part of the Space Shuttle program.

Cloy was an active member in his community. He was a member of the Family of Christ Lutheran Church in Ham Lake, Minnesota as well as a member of both the VFW and American Legion.

Cloy enjoyed hunting, fishing and golf.  He enjoyed “tinkering” and was known in the family as “MacGyver”.  His hobbies included woodworking, gardening, birdwatching and reading.  He enjoyed watching his Minnesota sports teams - the Vikings, Gophers, Twins, Timberwolves and the Wild.  He loved dogs, especially his dog Quinn. He also enjoyed visiting with his neighbors.