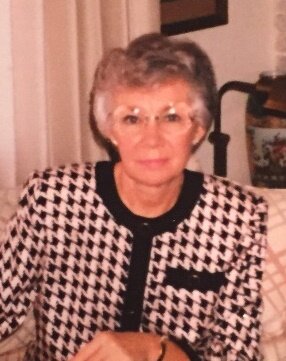 Kay was born in Kingsley, Iowa on April 19th, 1931 to Raymond and Esther (Peters) Hearn. She was united in marriage to Raymond Arlo Hess of Kingsley on July 27th, 1957 in Minneapolis, MN. The couple adopted their daughter, Mary, in Oct. of 1959.

Kay graduated from Kingsley High School in 1949 and attended Iowa State College and University of Wyoming where she affiliated with Kappa Delta Pi, educational honorary sorority and Alpha Chi Omega, social sorority. After college, she taught elementary school and music in Mapleton, Sioux City and Kingsley. While teaching in Kingsley, she served on the teachers advisory board and was in charge of the elementary school music Christmas programs.

She met Ray, the love of her life while teaching in Kingsley. Kay became a stay at home Mom after Mary arrived. The family moved to Spirit Lake in 1976 after Ray’s retirement from Hess and Hess Law. She then worked for Tonsfeldts Decorating Studio and later, The Company Store.

Kay was an amazing gourmet cook and baker, seamstress, and had a natural gift for decorating and gardening. She was featured in a full page article, in the Sioux City Journal as a part of the “Come Into My Kitchen” series in 1974. The article, “Kay Hess Pays Attention to Detail” highlighted her gourmet cooking and entertaining skills... along with many of her favorite recipes...

While in Kingsley, Kay served 17 years as a dedicated organist for the United Methodist church.

She was an elegant and classy lady with a sharp sense of humor who sincerely loved people. She always put herself last to her family and friends and adorned them with warmth, good food, conversation and humor. She was a connoisseur of the finer and simpler things in life…

Kay was a 61 year member of PEO. This philanthropic organization is committed to helping women pursue higher education and she was most proud to be involved in such a worthy organization...She was initiated into Chapter GS in Kingsley in 1959 and joined Chapter BE in Spirit Lake in 1978. She treasured the bond that she cultivated and shared over the years with her PEO sisters.

While in Spirit Lake, she also volunteered and served on the Board of Directors of the Lakes Art Center. She co-authored 2 cookbooks that were huge early successes for fundraising for the center. One was “ What To Do With All Of That Damn Zucchini ” and the other was “Thumbprints”.

She and Ray enjoyed traveling and the couple traveled abroad often. Their most memorable trip was with Mary in 1970 where they spent 6 weeks in Europe re-visiting all of the countries and towns where Ray had spent time during his WW2 assignment. They continued their travels after Mary left for college and
eventually spent their winters in Scottsdale, AZ.

Kay is survived by her daughter, Mary of Scottsdale, AZ. She was preceded in death by her parents, 2 sisters, Gloria Varn and Ruth Gadbois and husband, Ray.

A Celebration of Life Ceremony for both Ray and Kay will be held Tuesday, August 2nd at 11 AM at the Landings. It will be held outside the Clubhouse with Covid precautions in place weather permitting. Casual attire.