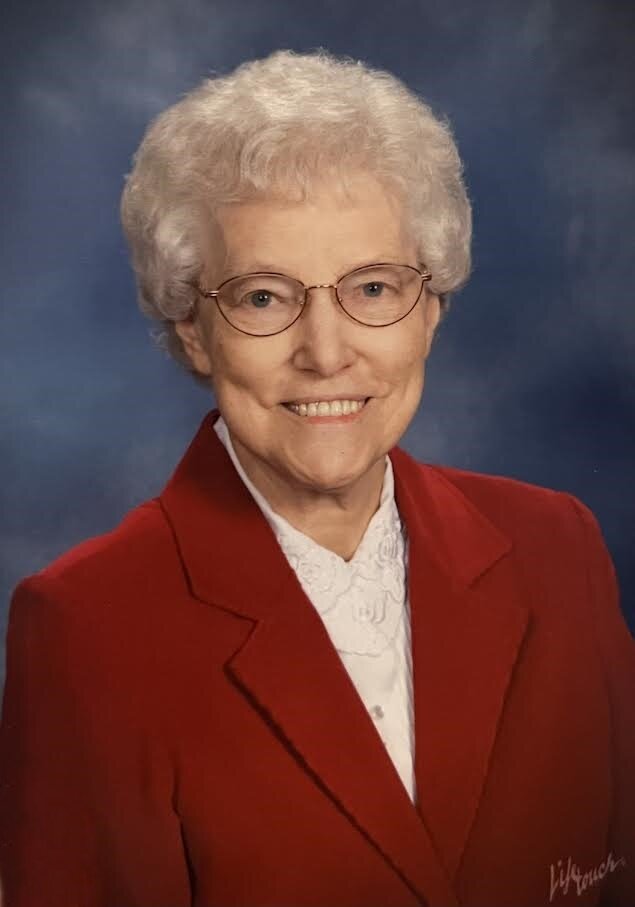 A funeral service for Jeanette (Jean) Post, age 96, of Spirit Lake formerly of Ocheyedan will be held on Saturday, August 20, 2022 at 11:00am at the Christian Reformed Church in Ocheyedan. Visitation will take place on Friday, August 19, 2022 from 5:00-7:00pm at the church in Ocheyedan.

Jeanette (Jean) Anna Post was born March 24, 1926 in Worthington, Minnesota.  She was the daughter of Peter and Agnes Talstra Swaving.  She grew up in rural Reading, Minnesota, and graduated from Worthington High School in 1944.  She then trained to be a teacher at “Normal School” in Blue Earth, Minnesota.  She taught Grades K – 8 at Prairie Hill District #29 in Nobles County for two years.  She married Garrett Post in the Christian Reformed Church in Worthington, Minnesota on July 10, 1947. That same year, Ocheyedan Christian School opened its doors and she became the first principal, teaching grades 4 – 7. They made their home in Ocheyedan where they raised their five children. In 2002, they moved to Heartwood Heights Assisted Living in Sibley, Iowa. Jean continued living there after Garrett’s death in 2008. They had been married 61 years. In the fall of 2018, Jean moved to Wel-Life Assisted Living in Spirit Lake to be closer to two of her daughters.  She passed away on August 14, 2022, at Acura Healthcare in Spirit Lake, Iowa.

Jean was a member of Ocheyedan CRC her entire married life, and at age 96 she was the oldest living member.  She served as Sunday School teacher, head librarian, bulletin secretary for many years, and was on various church committees.  Ocheyedan Christian School was also very important to her.  Her five children all graduated from OCS as well as several of her grandchildren. She volunteered as a tutor, took care of the flowerbeds, and worked weekly with the Trash For Cash program.  Over the years, they had nine Christian School teachers live with them as no housing was available for single women.

Jean enjoyed decorating cakes, tending her flower gardens and sewing clothing for her children, including her three daughters’ wedding dresses. She was an avid reader and also sketched the plans for their new home.  In her later years, she crocheted 273 wheelchair lap blankets that were given to Hope Haven.

Those left to cherish her memory are her children: Phyllis and Art Attema of Spirit Lake, Iowa; Doug and Betty Post of Pebble Beach, California; Judy and Dave Graanstra of Spirit Lake, Iowa; Donna and Lee Van Grouw of Rock Valley, Iowa; Kevin and Robin Post of Custer, South Dakota; 17 grandchildren and 29 great-grandchildren.  She was preceded in death by her husband, her parents and seven siblings. Jean's love for her family is a precious legacy and her Christ-like example is an inspiration to all who love her.